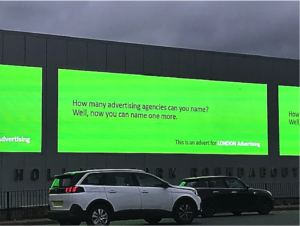 I council my advertising agency clients to advertise. I mean, actually use on and offline advertising to advertise the agency to increase awareness within the marketing universe, own their own story, and drive incoming leads.

Oh, and be UNIGNORABLE. A weirdly wonderful thing to do.

Today, LONDON Advertising, an uber-cool, massively award-winning and strategic major league agency, has done just that. These guys are ballsy and not your mother’s advertising agency.

The ad I am highlighting says, “How many advertising agencies can you name? Well, now you can name one more.”

A bit more about LONDON – note how focussed their positioning is:

LONDON Advertising is a global agency with just one office. It was set up in 2008 (two weeks after the collapse of Lehman Brothers) to disrupt the traditional network agency model. Since then it has worked with clients based on every continent and run campaigns in more countries than WPP has offices. The agency’s iconic “I’m a fan” campaign for Hong Kong-based Mandarin Oriental has proven to achieve the highest ad recall ever recorded by Ipsos Mori.

LONDON Advertising has been voted Agency of the Year for six out of the last seven years.

Agencies have historically told their clients to advertise into the headwinds of a recession. Reasons include hold your share or voice; increase your share of voice; be one of the winners while your competitors hunker down; make sure your brands don’t die a slow death. You get this picture. Well here is an agency putting their money where their mouth is. A rarity even in the good days.

I am going to let the LONDON Advertising press release speak for itself.

However, few agencies take their own advice.

LONDON Advertising is taking its own advice and is today launching a major campaign with
10 TV ads, starring Helen Mirren and Liam Neeson, on 9,000 spots on Sky News.

The TV is supported by super-premium digital posters across Ocean Outdoor’s UK portfolio and Linked-in. The campaign is running from 6th July to 2nd August and will reach 30 million people.

“Our campaign, launching on the first working day after the easing of Lockdown, is a call to arms to all businesses to get Britain going again. We believe in ‘by example shalt thou lead’ and that we all have a duty to help rebuild our economy.”

“This is the first time I have seen an ad agency do a major campaign like this for itself.
The ads are bloody brilliant!”.

“It is a fact advertising builds brands and fame. We believe the current situation provides a rare opportunity. Audiences are currently higher than normal and media is cheaper, as many companies have cancelled their campaigns. So, we’re doing what we would advise our clients to do; advertise now.

Our campaign demonstrates the three criteria we believe work must satisfy to be effective: Is it simple? Does it stand out? Can you remember who it’s for? A lot of advertising fails to do one, two or all three of these things.

We also wanted to show it’s the size of your idea that matters, not the size of your production budget. We would like to thank Dame Helen Mirren and Liam Neeson, OBE, for making themselves available to take part in the campaign.”

Here Is The Advertising.

Hi-res image of the poster ads can be downloaded here