I Discovered The Internet – Kinda True 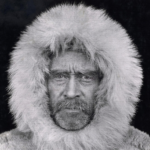 This is my 800th blog post. So why not get personal? Here is my story about how I discovered the Internet and left advertising in 1995 to become an Internet start-up CEO. I think that it might be instructive to the people leaving the advertising industry today. Don’t take my word for it, people are leaving – read Avi Dan’s Forbes article, “People Are Fleeing The Ad Industry Because Of Burnout And Wanting To Work From Home.”

By the way, that is a picture of the explorer Robert Peary.

After my three years working at the Saatchi & Saatchi Advertising Worldwide London office as European Director running business development and the J&J and Sara Lee Europe accounts, my family and I returned to Summit, New Jersey in the winter of 1994. Our welcome was a brutally iced in house. So iced that we had to hire some off-duty firemen to chop out the ice so we could use the front and back doors.

My job was running Saatchi’s North American business development group. The job was nearly impossible as poor management had trashed Saatchi’s New York reputation and the global brand itself was in decline. The Saatchi brothers had finally overreached when they tried to buy a UK bank. These advertising guys’ “want to buy a bank” hubris was not warmly received by the public markets. Saatchi’s had gone from being the “world’s favorite” advertising agency to a company that no longer got the type of new business incoming and responses I had become accustomed to. Like, I wasn’t getting returned calls from prospective clients. This was a new experience. However, I was getting weekly calls from the trade press asking me for comments about people fleeing the New York office. Not the kind of trade media calls a business development director wants to receive.

I Discovered The Internet 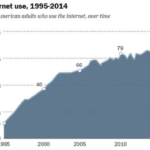 I immediately fell in love with digital platforms like CD-ROMs, Netscape Navigator (the first commercial graphical browser launched in October 1994), and, of course, America Online and CompuServe. I was also seeing the exponential growth of Internet usage – as shown in the chart. How could this not be a gold rush? This was around the time that Jeff Bezos became enamored with the dramatic hockey puck growth of Internet uptake and you see where that got him. Side note, I had had my first early taste of digital when I briefly ran the Western Union Easylink email account a long time before I moved to the UK. Easylink was the first commercial email service – or as we called it, Instant Mail. Um, yes, a good idea but a bit early. Understatement.

In 1995, one did not have to be a genius to see that the digital universe would become a serious advertising platform. I tried to get Saatchi management interested but they were so consumed by the Saatchi death spiral that, like small children, I could not get them to focus on the new opportunity that was right in front of them. We could have been a contenda.

A Life Switch – “Get The Fuck Out Of Advertising”

Two things soon happened that would change my life.

First, thanks to my prescient friend Mike Donahue, who was the digital lead at the American Association of Advertising Agencies, I found out about Redgate Communications. The leading, and one of the few, digital ad agencies.

I cooked up having a sales meeting with the CMO of The Hard Rock Cafe in Orlando so I could tag on a visit to Vero Beach for an intro meeting with Redgate’s CEO Ted Leonsis. The meeting was rather consequential for a couple of reasons. I’ll stick to the first one right now.

Ted railed about the slow uptake of digital marketing. He made his point by showing me the cover of that day’s Wall Street Journal. The Journal had finally added color to its front page. Ted’s like, “This is the best today’s media can do. Add color to newspapers!”. He then told me that Redgate had been bought by AOL and he was moving up to Virginia into a senior position. Under his leadership, AOL increased its membership from under 800,000 members to over 8 million. Ted made just a few bucks over the years and is now the owner of the NBA’s Washington Wizards and NHL’s Washington Capitals. As a bit of dramatic foreshadowing, Ted came back into my life in 2001.

Oh, the second reason the meeting was consequential was when Ted said this rather forceful statement to me as the meeting ended…

Peter, get the fuck out of advertising.

I paid attention and did that.

During the middle of my last year at Saatchi, I made friends with the agency’s digital guru. He helped me buy my first Macintosh and fed me a digital diet.

While still at the agency, we cooked up the idea of wiring the town of Brunswick Maine where he had a summerhouse to create one of the first localized Internet news and community information networks. The goal was to build a local private network that would act as a test market for the distribution of digital information, community interaction, and digital marketing. Yes, a brilliant idea. Don’t laugh, it was true. We were on the road to get funding from AT&T and Boston’s Digital Equipment Corporation when I got a phone call from another Tom – Tom Florio – who was the publisher of The New Yorker Magazine. This Tom was aware of my interest in all things Internet and, said, “I do not really have a clue what it is that you are doing. But, the Newhouse family (owners of Advance Communications which included the third-largest newspaper group, the Conde Nast Magazine group, and Random House) is looking to put their newspapers online. Maybe you should talk to them.”

Shortly after, I went to Jersey City’s Journal Square to meet with Jeff Jarvis, the president, creative director, and brains behind Advance Internet. We quickly bonded over the idea that local media would shift into the digital platform big time. I met with a couple of other Advance people, including Michael Newhouse and they hired me to become the CEO and one of the founders of New Jersey Online.

I brought three things to the New Jersey party: management experience; a local perspective and my advertising background because way back in the 1995 Internet, web-based advertising was in its infancy. I would get to be one of the new media pioneers. Yes, more brilliance… clickable ad banners anyone?

NJO, which is what we called New Jersey Online at the time (it is now NJ.com), hit the ground running. Along with my editor partner Susan Mernit, we built the website on the back of the already successful NJO Weather, the leading national weather service and our inbound news feed from Newark’s huge Star-Ledger, Jersey Journal, and The Times of Trenton newspapers. It might be hard to imagine this now, but these three newspapers were a solid part of most of New Jersey’s daily life.

In addition to providing daily news, we leveraged the booming world of online forums. I had taken the advice of the publisher of the Star Ledger who told me that the sports section drove the newspaper.

We were also the first online service that delivered 24/7 news via our relationship with the Associated Press.

More… We were blessed to be in the New York metro with deep daily coverage of the Yankees, Mets, hockey’s Devils, Islanders and Rangers, and basketball’s Knicks and Nets. The Star-Ledger publisher told me that including local sports, and especially having photos of local high school athletes and youth soccer kids, would send parents into daily usage.

I need to stop for a second and tell you that our editorial plan included some crazy stuff like the Haiku Movie Reviewer, The Yuckiest Site On The Internet, and a viewer-controlled Jersey Shore beach cam (that zoomed in a bit too far). The plan worked. When I say worked, at that time, NJO had a higher daily readership than the New York Times online.

We also launched one of the first digital agencies. Our Journal Square Interactive built websites for mega clients including Honda, Microsoft, and Nabisco. Even the Basketball Hall Of Fame.

I could keep writing for a loooooong time. But just to close out this chapter, I moved from New Jersey Online in 2000 to be one of the founders and CEO of ActiveBuddy — the first commercial artificial language chatbot. Some of you might remember our bot SmarterChild. But hey, that is another story.

Oh, Ted Leonis did come back into my life to play another big role. He had become president of AOL and after months of meetings, AOL declined to buy us. I said, “But Ted, you are the one who told me to get the fuck out of advertising.” The good news: Microsoft eventually bought the technology.

Ok, me first. I was lucky, or as they say, I made my luck. I found myself back in the USA just when the internet was in its early groove; I dug into it; I had the power of Saatchi behind me so I could leverage our street cred to help me meet players like Ted and get me invited up to the MIT Media Lab; had early ideas and a decent friend network that got me Infront of AT&T’s VC group and the important introduction to Advance Publications which had just then decided to devote millions to the new online world.

My mantra – Always be Curious.

If you want to stand out at your advertising agency or corporation or just want to become an AI guru…. do this.

On a personal note, if you are an agency CEO or a newbie and need a push – as in advice, give me a shout.