This is a post about advertising agencies and the ongoing move to digital marketing and as a result, the need for more nerds. In this case, I mean a single-minded person that is highly focused on a technical field, like mobile advertising; programmatic media, database marketing or, well you get it. Stick with me on this one.

There is some personal history here and yes, the name dropping is important. I am trying to make a point and can use all the help I can get.

I “discovered” digital marketing in 1994 when I came home to the U.S.A. from Saatchi London where no one had a computer on their desk. I returned to work as Business Development Director at Saatchi & Saatchi Advertising New York and as it turned out, it was my 16th and last year at the agency. My eventual move out of advertising was stimulated by my discovery of and fascination with the new world of interactivity via CD-ROMs and a life-changing conversation I had with Ted Leonsis who, at that time ran Florida’s Redgate Communications. Redgate was very early digital agency founded in 1987. I found Ted through the 4A’s Michael Donahue another early digerati (you could say this word then without cringing). Using my Saatchi credential, I met with Ted and he told me two very interesting things. One, his company had just been bought by America Online and two, this advice,

“Get the hell out of advertising, it is going to die. Move into digital.”

Well, after the meeting I did two things – one a mistake and the other, the smart one: I listened.

The mistake was that I didn’t buy America Online stock (its stock rose 600 percent in 1998). Had I, I might be sorta near (well, kinda near) where Ted wound up. Today, he is the owner of Washington D.C.’s Capitals, Wizards and Mystics.

Second, I did move into digital. About a year after my conversation, Advance Communications, owners of the third largest newspaper group, Condé Nast, Parade Magazine, Random House and lots more, offered me the job of founding, inventing and running New Jersey Online (NJO), one of the first online newspapers. NJO did OK… its awards included Best Online Newspaper by the Newspaper Association of America (1996) and Top Ten News Site from The American Journalism Review (1997). Running an online newspaper in an emerging digital platform was fantastic and we went further to expand our company to build corporate websites for clients like Nabisco, the Basketball Hall Of Fame and Microsoft.

My next move was to co-found and be the CEO of ActiveBuddy in 2000. ActiveBuddy created natural language “bots” that allowed people to talk directly to computers (an early stage Siri) using Instant Messaging and mobile phone text messaging. Our SmarterChild interactive agent appeared on more than 15 million buddy lists – making it the most popular bot in history. The most fun we had was creating Radiohead’s bot “Googly Minataur” for Capitol Records. Microsoft bought the company in 2004.

OK, why all of this history?

One of my key takeaways from SmarterChild was understanding the power of super smart, visionary computer scientists. Super nerds. One of my co-founders, Tim Kay, was a super nerd who showed me that one brilliant computer scientist was worth at least 3 decent ones.

Finally the meat: I want to support a blog post I wrote a few weeks ago for Advertising Week Social Club. The post, “Advertising Agencies: Your Next Hire Should Be A Nerd”, recommends that agencies consider hiring developers, computer scientists and engineers before they hire their next Creative Director. I hope that you’ll read the post. My primary point is that advertising agencies (I am referring to the more traditional / full-service variety) should be thinking seriously about how to really jump-start their digital offer.

One of the points I make in this short post is about the need to rethink the advertising agency business model. As I say,

“In fact, a recent conversation that I had with Tom Finneran, EVP at the 4A’s, netted this insight:  agencies should be creating their own intellectual properties that they can sell, and sell again.” 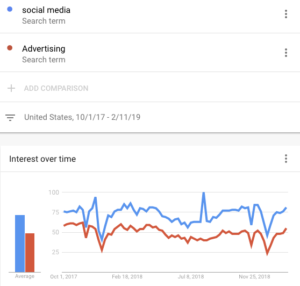 Today’s agency is stuck in the pay for play model. It is all about billable hours. Unfortunately, this means that an agency is sort of starting each day with a blank sheet. Why can’t agencies have IP that they can run, rent and resell? Why are they leaving the advertising technology money on the table for advertising startups that have, yup, you guessed it, smart developers, computer scientists and engineers on their staffs? I don’t have all of the answers here but I do know that shaking up the business model is critical to the 2019 and beyond advertising agency. We are talking about survival here. Just look at the relationship of interest in “advertising” vs. “Social media” in the Google Trends chart at the left.

How To Hire A Nerd…

Last point. I have lots of conversations with my clients about how advertising and design agencies can grow their digital expertise. It isn’t easy (again, read the Advertising Week post) and mistakes can be very expensive. The dilemma is that a non-tech savvy agency will have a very difficult time understanding how to judge and vet the skill-set and value that an individual developer /  programmer / nerd can bring to the agency.

I have two suggestions.

Start with hiring a Digital Strategist. While even this hire won’t be easy, at least in this case, you are hiring a person that must be skilled in technology and… marketing, advertising, hopefully, mobile plus have good client and presentation skills to boot. The good news is that these people are out there. For example, my LinkedIn 1st and 2nd connections include 18,500 people with “Digital Strategist” in their profile. I’ve got over 1,000 in the Portland area alone. Crazy, right?

My second piece of advice is that an agency needs to use the assistance of experts in making more technical hires. To be frank, a non-digital agency CEO simply does not have the knowledge to make important digital decisions. In recent discussions on this subject, I’ve recommended that agencies find an articulate third-party to help go through the hiring process. I am sure that tech recruiters can help, although there will be an extra expense. My sense is that an agency will save (and make) more money in the long run.

Let me know what you think. I know that this subject resonates.