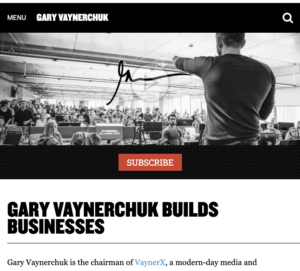 Let me explain. I “stole” a few of the design elements of this new Peter Levitan website. Some of the core elements are from the Gary Vaynerchuk home page. Stealing, art that is, is OK. Picasso said I could do it.

And, don’t tell the Judges at award ceremonies that most of the great advertising ideas were “borrowed”. No, I am not being pissy. Ideas regenerate. Keep reading.

What I Stole From Gary Vaynerchuk. Go To My Home Page.

If you look at the Gary Vaynerchuk website next to mine, you will see similarities. Each website leads with a chest-beating video (always a good thing) and then a clear benefit statement (even better). Both websites are very clean and direct. Thank you, Gary.

Why steal from Gary Vaynerchuk? He is a dude that gets personal brand marketing right. Need more?

What I Stole From Chris Burden? Go To My Home Page.

Chris Burden was a genius performance, sculpture, and installation artist. He is very well known in the art world for instillations like the rows of lampposts outside of L.A.’s LACMA museum and got his first taste of major-league art fame when he was shot in the arm in his “Shoot” performance video. Shot by accident by the way.

I stole the idea for my lead video from Chris’s 1970s TV commercial. Just so you know, I am not the only person to have stolen Burden’s idea. To state the obvious, the video is all about name association: Van Gogh and Burden. Droga and Levitan. Look at Chris’s video interview – the idea I stole is at the 4:50 mark. How did I do?

What I Stole From Derek Sivers. See My About Page.

I have been wrestling with how to tell the story of my 30-year advertising; digital; internet startup; and advertising agency business consultation career. It could take a long time. Too long.

I finally figured out how to do it from Derek Siver’s website. Derek is the founder of CD Baby. This is what Esquire said:

“Derek Sivers is changing the way music is bought and sold. A musicians’ savior. One of the last music-business folk heroes.”

Derek covers his extensive and very cool career with his home page help-the-reader bio subheads: Me In Ten Seconds?; Me in Ten Minutes? What I Am Doing Now? Concise, fast, easy to absorb. I needed this degree of simplicity, so I stole his idea.

What I Stole From Mahatma Gandhi. See My Contact Page.

Do I have to say this? Sure, why not.

“Mahatma Gandhi was an Indian lawyer, politician, social activist, and writer who became the leader of the nationalist movement against the British rule of India. As such, he came to be considered the father of his country. Gandhi is internationally esteemed for his doctrine of nonviolent protest to achieve political and social progress.”

I spent the month of January 2020 in India. I visited Gandhi’s home in Mumbai. I picked up on his vibe and wanted to have him do a testimonial. Of course, it has been over 40 years since his assassination. So, I found a modern-day Gandhi to deliver the testimonial.

You can see what I mean when you scroll down my Contact page.

By the way, I also stole from Donald Trump – he is at the bottom of my home page.  I admit it, I am a bit less proud of that theft. 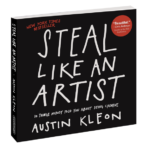 In this case, Austin’s best-selling book “Steal Like An Artist” – buy it at the great Powell’s Books. He told me to steal. As Austin points out…

I hope you enjoy your own art of stealing.